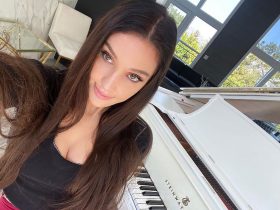 Elijah Hendrix Wahlberg is an American celebrity kid. Born to a famous actor, he has a celebrity surrounding. Elijah is the son of actor, singer, and songwriter, Donnie Wahlberg. And his uncle, Mark Wahlberg, is another A-list actor.

The renowned celebrity kid has managed to follow in his father’s stardom. The Wahlberg family is one of the more popular ones in Hollywood, and Elijah reaps the benefits.

His father, Donald Wahlberg, was born in August 1969. Let’s check the life of his son, Elijah Hendrix Wahlberg.

His father, Donnie, appeared in movies like Saw series, Righteous Kill, The Sixth Sense, and Dreamcatcher. And his uncle, Mark Wahlberg, has a huge list of blockbuster movies on his resume. Donnie’s acting credits also include drama series like Blue Bloods. He now serves as the executive producer of the TNT reality TV show, Boston’s Finest.

Some friends and relatives consider Elijah a future bright start in the world of acting. We sure hope he grew into a prominent actor.

Born in August 2001, he is still a teenager. This year, he will turn 20 years, and he will finally cross “teen” off his list.

Most sources claim he doesn’t have a girlfriend. But considering he is a celebrity teenager from the Wahlberg family name that is hard to believe. It is much more plausible that he has a secret relationship that he doesn’t want to share with the public. In any case, we hope he will update us on his relationship status once he wants to make it official and public.

His older brother, Xavier, is another celebrity. Born in March 1993, Xavier dreamed about a music career. So, you can say Donnie’s kids both followed in his footsteps. Xavier will enter the music world, and he has already played as a musician for a hardcore, death metal band. He hopes to leave his father’s influence and shadows and make it on his own.

And Elijah has the potential for a successful acting career. What will happen in the future? We will have to wait and see.

Xavier and Elijah are Donnie’s sons with his first wife, Kimberly Frey. Donnie says he had the time of his life raising these two amazing kids. Following the divorce from Kimberly, Donnie got married again. This time, to American actress and television host, Jenny McCarthy. He serves as stepfather to Jenny’s son, Evan Joseph Asher.

Besides acting, Elijah also loves photography. He is an avid and passionate photographer and loves sharing his pictures on social media.

Elijah Hendrix Wahlberg has only 19 years of age. This year, he will turn 20. So, how much is his cash flow? Well, not a lot of children can say they have earned a lot of money by the age of 20.

According to some sources, Elijah Hendrix Wahlberg has a wealth of between $300,000 and $500,000. He spent his childhood living with his mother. She won guardianship following the divorce from Donnie. The famous actor got involved with another lady, giving his mother, Kimberly better chances of winning the guardianship.

Now, about his fortune. His father does support him and tries to be around as much as possible. And while we do not know much about the salary and income of Elijah Wahlberg, we know about Donnie.

The famous actor has a fortune of more than $25 million.