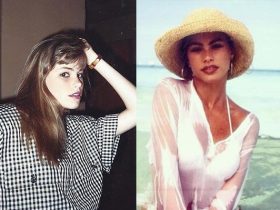 8 Rare Photos Of Sofia Vergara When She Was Young

Helen Hunt is an Oscar-winning actress. She has been around television and movie audiences since the 1970s. She debuted as a child actress, and from there on, she went on capturing our hearts and souls. Helen’s most famous movies include As Good as it Gets and What Women Want. For the former, she won an Academy Award for Best Actress in a Leading Role.

Hunt also has an Oscar nomination for The Sessions. Throughout her career, Hunt won four Emmy Awards. She won a Primetime Emmy Award for her appearance in Mad About You. In that TV show, she played alongside star Paul Reiser. With that in mind, what happened to Helen Hunt’s face in the past few years? Fans think she has gone through some serious plastic surgery.

Is there any truth in the Helen Hunt plastic surgery rumors? Let’s take a look.

When Did the Rumors Start?

Helen has a recognizable face. She got widely famous for portraying Jamie Buchman in the hugely popular NBC television series, Mad About You. The show ran in the 1990s and made Helen a star. But she has worked in Hollywood since she was eight years old.

During her entire life and Hollywood career, Hunt has been blessed to enjoy longevity. And it is all thanks to her cute and adorable recognizable face. Mad About You also helped her win Golden Globe and Emmy Awards.

Hunt has been recognizable in more than 150 television, movie, and film productions since her career debut in the 1970s.

But in 2011, Hollywood fans and watchers started noticing changes in her appearance. During an episode of Good Morning America in 2018, the Helen Hunt plastic surgery rumors started appearing even more.

What Happened To Helen Hunt’s face?

So what happened to her face? In 2019, cable service Spectrum Originals launched a reboot of the popular Mad About You television series. Helen went on Good Morning America to promote the return of the show.

Comments about her new look immediately started appearing. Fans took the liberty to ask whether Helen had aged naturally.

Mad About You fans raved at how great the revival was. Some said they were pleasantly surprised at how it seemed like no time had passed in the 20 years since the series went off the air.

But many viewers noticed the obvious plastic surgery marks on Helen Hunt’s face. She had a mannequin-like appearance that made her look bizarre.

Many viewers of the BBC war drama World on Fire also voiced the same concern. Helen has always been a star with a fresh face. But it looked like her face endured so much work, it was difficult for viewers to focus during her scenes. Fans found her new face and look distracting.

Some even went on to say that it must have been the work of CGI effects that made her odd-looking face. Fans said her face “went from looking gaunt with a slimmer profile to having a fuller face”. Many speculated it was because of cheek fillers.

Remember, Hunt is in her 50s. But she doesn’t appear to have any wrinkles or laugh lines on her face. This raises the concern of numerous botox injections.

But the answer to the question of what happened to Helen Hunt’s face lies somewhere else. The famous actress was involved in a car accident in October 2019. She drove a black SUV in Los Angeles. The car flipped on its side and as a result, the American actress suffered serious injuries.

Helen was briefly hospitalized but released from the hospital later in the night. She didn’t have to endure any surgeries as a consequence of the car crash.

Hunt quickly posted on her social media pages like Instagram that she will return to work following the quick recovery from the car accident.

Helen Hunt has been the subject of plastic surgery rumors for more than a year and a half. For years many fans speculated the American actress has gone under the knife. But they intensified in 2019 when World on Fire aired.

One fan even asked the question on Twitter, “What the hell is wrong with Helen Hunt’s face”? We have to remember, that Hunt is only human like the rest of us. She ages a little bit.

Now, her nose and lips look identical when you look at older photos and newer photos. But her face does appear smoother in 2020. Yet, any modern makeup artist can help her achieve that look.

So, has Helen done a face job? Or a nose job? Any other cosmetic surgery procedures? Dr. Adam Schaffner, a plastic surgeon who has not treated Hunt, but who specializes in lifting procedures, says the following. According to him, “she might have had lifting procedures such as facelift and neck lift, and probably some minimally-invasive thread lift.

At the end of the day, Helen Hunt’s net worth is more than $75 million. She can afford some lifting procedures to still look beautiful in her later years.

Wouldn’t you do the same if you could afford it? Hunt has been in the public eye since she was a child actor.