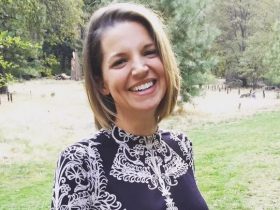 What is the first thing that comes to mind when you hear the name, Valerie C Robinson? She is a former famous American actress and model. But she got popular as the wife of American actor Michael Schoeffling. The fun part about their relationship and fame is that Michael semi-retired from acting after his successful appearance in 16 Candles.

So, where is Valerie C Robinson now? What is her wealth? Is she even alive? We try to answer all of these questions.

Valerie C Robinson i probably best know for her appearance in the movie Patty Hearst and One Shoe Makes it Murder. The first one came in 1988, while the second one in 1982. Before that, she appeared in the movie Having Babies II in 1977.

But we cannot find any information about her childhood, early life, and education. She was born as Valerie Carpenter Bernstein in the US, in January 1950, although some speculate about the accuracy of her birthdate.

In the 1980s, Valerie and actor Michael Schoeffling got married after a long-term relationship. Michael is also a former actor, famous for portraying Jake Ryan in the movie Sixteen Candles. That movie came out in 1984. But the actor retired from Hollywood in 1991, and many wonder why? After all, he was fantastic in 16 Candles.

His role of Jake Ryan left many fans crushing on the actor. At the time, he was 24 years old. And then, seven years older, he retired from acting in his early 30s.

Over the course of his seven years of acting career, he appeared in a small role in a couple of more movies, including Vision Quest, Mermaids, Pretty in Pink, Can’t be Broken, and many more.

But in his own words, even after his portrayal of Jake Ryan, he couldn’t find many roles. And at the time, he had to work to support his wife and children. So, he changed his profession.

In one interview, he said that many actors in Hollywood spend most of their time out of work. Hence, he decided to spend more time making furniture instead. Now, he is a carpenter. In his own words, “making furniture is better. In carpentry, there is no director and no script. Hence, the concept depends on him and he is free to use his creativity”.

Speaking about their wedding, Michael and Valerie started their married life in 1987. At the time, they were still in the Hollywood spotlight.

But after Michel Schoeffling retired from acting, they moved back to his home state of Pennsylvania. There, they take care of their two children. They have a son, Zane Schoeffling, and a daughter, Scarlett Schoeffling.

And what do you know, they are now back into the spotlight. And it is all thanks to their daughter, Scarlet. She is now a model on Instagram with a decent following. Currently living in New York City, her daughter often posts childhood pictures with Michael Schoeffling or with his wife Valerie C Robinson.

Scarlett is part of the OneManagement brand and LaModels. Her mother and father support her in her work as a model.

So, how much is the Valerie C Robinson wealth? The former famous actress and model now live with her husband in Pennsylvania. She is far and away from New York City and Hollywood and all those bright lights.

They have a carpentry company. Michael works as a carpenter to support his wife and family. According to some sources, Michael and Valerie have a combined net worth of $1 million.

Considering their success and popularity in the 1980s, this comes as a surprise. But at least they do not have to worry about not having acting jobs. Remember, things were different in the 1980s. There were not so many productions and movie makers.

Nowadays, even average actors and actresses can easily find a job in a television show, television series, or some movie.

Back in the 1980s, Michael retired from acting because he couldn’t find many roles and needed to support his wife and children. And he says furniture making turned out to be better than acting for him.

They continue living their blissful married life in anonymity.