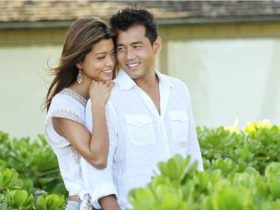 Lauren Nicole London is an American actress, model, and television personality. She began her career appearing in music videos. She then transitioned into movie and television acting. Her breakthrough role was in the ATL movie, as well as television show 90210 and Entourage. Lauren dated two of the most prominent rappers, Lil Wayne and Nipsey Hussle.

With several movies and television roles, her net worth is more than $8 million. She also inherited some money after the tragic death of her husband Nipsey Hussle.

Lauren is born in Los Angeles. She attended Palisades High School but decided to try homeschooling. This gave her a chance to focus on her focus career. When she was just a teenager, she appeared in music videos for artists like Common, Ne-Yo, Ludacris, Pharrell, Snoop Dogg, Tyrese, and others.

This helped her land a role on the Everybody Hates Chris sitcom. She appeared in the episode Everybody Hates Funerals. After that role, she got her breakthrough appearance. London lander a romantic lead role in the ATL movie.

For the appearance in ATL, she got a Best Supporting Actress nomination at the Black Movie Awards in 2006. Following the nomination, she landed a role in the Entourage television series. She appeared alongside music artists like Asia Nitollano and Cassie.

In 2013, Lauren joined the cast of the hit BET show The Game. She was a series regular from the sixth season until the season finale. She appeared in a total of 44 episodes from 2013 until 2015. London played a character named Kiera. Her character was based on a former child star who starred in a Cosby Show-esque sitcom.

She was a bridesmaid at Khloe Kardashian’s wedding. Her friendship with the Kardashians helped her land a role in many Kardashian-related television shows.

Her latest work is in the series Games People Play, a drama centering on the world of money, sex, and glamour in Los Angeles. She played the role of Vanessa King for 10 episodes.

Lauren got a nomination in 2006 for Outstanding Performance by an Actress in a Supporting Role by Black Movie Awards. This was for her role in ATL. She did not win the award.

London dated two of the most successful rappers in the past several years. She started dating Lil Wayne when she was a young kid. She first met him when she was just 15 years old. The two had an on and off relationship. The couple welcomed their son Kameron Carter in 2009.

They tried more than once to revive the relationship. They were also engaged for a brief period, but they did not get married.

Wayne refers to his girlfriend in several of his songs. In the second verse of the song Young’n Blues, he explains how he met the 15 year old “young Cali sweet thang”.

In California Love, he explains how he proposed to her with the lyrics “and in dat box, it’s a ring, somebody considers that thing and advises her shawty give me back my ring”. Wayne had Lauren tattooed on his right arm from 1999 to 2003. He wrote Carter over it after his marriage to his now ex-wife.

In 2013, Lauren dated another rapper. This time, she was in a relationship with Nipsey Hussle. The two were together until his murder and tragic death in 2019. The couple has a son Kross Ermias Asghedom.

Nipsey and Lauren started their relationship after connecting through social media. In February 2019, shortly before Nipsey’s death, the couple appeared in a GQ feature. She spoke about how much she admires his work.

Net Worth, Assets and Lifestyle

Following the death of Nipsey Hussle, Lauren moved into another house. She purchased a Spanish-style residence in Sherman Oaks. For the 4-bedroom and 3-bathroom home, she paid $1.7 million.

The house is a 2,628 square-foot home and it includes a backyard built-in barbecue with bar-style seating. In the living area, the house has a fireplace opening onto the backyard through a double glass door. And as with most celebrities, she has a walk-in closet in the master suite.