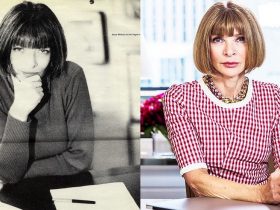 12 Rare Photos Of Anna Wintour When She Was Young

Born in November 1987, Karen is a Scottish actress and filmmaker. She began her career with guest roles on television. Karen broke through with her portrayal of Amy Pond in the BBC One series, Doctor Who from 2010 to 2013. For this role, she received a couple of awards and critical acclaim. Movies started coming, and soon, Karen Gillan’s sexy pictures surfaced as well.

Now, many consider her one of the more beautiful actresses in Hollywood. With her mixture of red and brown hair, Karen turns heads everywhere she goes. And she gets more and more blockbuster movie roles. Karen is part of the Guardians of the Galaxy Marvel franchise, portraying Nebula. She also joined the Jumanji franchise.

In 2013, Karen relocated to the US and that is when her career took off. In the US, she got a starting role in Oculus, and then a lead in the ABC/Hulu series Selfie in 2014. From 2014 onward, she has portrayed Nebula as part of the Marvel Cinematic Universe.

In 2018, she embarked on a new journey, trying herself as a writer and director. She wrote, directed, and even starred in the movie The Party’s Just Beginning.

During her career, she has received numerous awards, including an Empire Award, National Television Award, Teen Choice Award, and more. Karen also got a nomination for a BAFTA Scotland Award and a Saturn Award.

In the past several years, Karen has voiced her opinion about several topics in society. Noted for her activism towards suicide prevention, Gillan uses her fame and popularity to raise awareness about important topics.

But suicide prevention is not her only activism role. She also promoted Fashion Targets Breast Cancer in 2011.

In 2020, amid the Covid-19 pandemic, Karen launched a project collaborating with software engineers to develop an app. Called Ditto, the app is a social network focusing on creativity and collaboration. She describes it as, “where Instagram meets Photoshop”.

Now, let’s take a look at some of the sexy photos of Karen Gillan that have surfaced online since her appearance on the big screen. As one of the more beautiful actresses in Hollywood, Karen Gillan’s hot pictures appear constantly.

As we said before, Karen has a hair color somewhere in between red and brown. And that makes her one of the more attractive and mystique ladies in Hollywood. Photographers love her. She brings a certain flair to the photo shoot.

And because she loves playing with the camera, we get a lot of hot photos of Karen Gillan.

2. Playing With The Camera

Karen plays Nebula, an anti-hero in the Marvel Cinematic Universe. When she first appeared on screen, Nebula supported the bad guys. And that is the idea here, putting Karen in a role where she appears as a scary monster. Thankfully, we know Karen is with the good guys now.

Karen doesn’t show a lot of pictures from her everyday life. Yes, she does post photos with her Nebula makeup, or in her Jumanji outfit. But she likes to keep her personal life more private. There are not many bikini shots of Karen Gillan.

But every now and then, she posts a photo of her relaxing during her vacation.

Karen is definitely a big city girl. She loves it there. And look how naturally that outfit and style looks on her. Whenever she puts on a mini skirt, fans love it. Those are some of the sexiest pictures of Karen Gillan. She has legs to kill for.

One of the best parts about Karen Gillan is that she can easily adjust to any role. She can play a good guy, a villain, a cute girl, an adorable girl, a sexy woman, or even a troublesome teenager. This is a photo from her earlier work. And as you can see, she fits just as seamlessly.

We had Karen Gillan in a bikini photo, and we see her in some sexy lingerie. While she normally doesn’t do these types of photo shoots, Karen has a stunning body. And photographers want to take pictures of her, logically.

Fans that follow Karen know she has one of the most amazing bodies in Hollywood. But with the Jumanji movie, even casual fans started following her. After all, the movie dresses her in short pants and a tight sexy shirt, showing more flesh than usual. As Nebula, we don’t get to see her beautiful body. But in Jumanji, she showed all kinds of sexiness.

When you reach a certain level of hotness, you can dress casually, and look amazing doing it. That is the level Karen has reached in the past few years. Even when she goes for a coffee in the city in a casual dress, she looks hot. We cannot help but love her.

Most of the sexy pictures of Karen Gillan come from her photo shoots. Yes, she looks amazing at red carpet events, casually strolling through the city, or in her movie outfits. But when a photographer puts her in front of the camera, magic happens.

She definitely knows how to act and “make love” with the camera. Look at this teasing photo.

As part of the Marvel Cinematic Universe, Karen got to appear in a couple of movies. But she also gets to join stars at the red carpet premiere for other Marvel movies. Here, we see her at the premiere of Spider-Man: Homecoming. That slit goes higher and higher, and her hotness follows.

If you thought you can have an amazing body without exercise, think again. Karen makes sure to use every spare moment to exercise and keep her body in shape. As you can see, she even squats in her trailer between scenes.