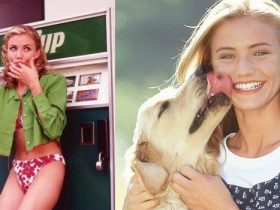 9 Rare Photos Of Cameron Diaz When She Was Young

Juice Wrld was a young mind in the American rap industry. His death came in at the most unexpected point of his career. At the time, he was a widely followed American rapper. Fans across the world loved him. Juice earned his money from music platforms and concerts.

Juice’s real name is Jarad Anthony Higgins. Besides rapping, he owned a merchandise line of T-shirts, hoodies, and socks.

Born in Chicago in 1998, Juice went viral with his song Lucid Dreams. The song has more than one billion views on Spotify.

Juice got a contract with Grade A Productions and Interscope Records. The artist dazzled fans with his emotive lyric and artistic range. He dies tragically on December 8, 2019 of drug abuse. He left behind a family, a precious collection of hits, and a legion of fans.

His posthumous feature on Eminem’s single Godzilla contributed even more to his rise in popularity.

Juice started his career as an artist in his first year of high school. Higgins released his first track, Forever, on SoundCloud in 2015. At the time, he used the moniker JuicetheKidd. In the beginning, he recorded tracks using his cellphone and uploaded them to SoundCloud.

He changed his name to Juice Wrld, showing he was about to take over the world. Nick Mira was his first producer, and the two released the track Too Much Cash in 2017.

At this point, he worked in a factory. But he quit the job and joined the internet collective Internet Money. Then, he released his debut full-length EP, 9 9 9. The song Lucid Dreams broke out almost every record by a new artist.

The success of Lucid Dreams got him a collaboration with artists such as Waka Flocka, Flame, Southside, and G Herbo. He then signed with Grade A Productions.

In 2017, he released his next EP, Nothings Different. The track All Girls Are the Same gained popularity. And in February 2018, he released a video for the song. At this point, Interscope Records signed him for $3 million.

In May 2018, he released Lucid Dreams as a single, and then a video followed. The song peaked at Number two on the US Billboard Hot 100 chart. It was one of the biggest streaming songs of 2018. By the summer of 2018, he released his first studio album titled Goodbye & Good Riddance.

In July 2018, he released his first single featuring a collaboration. Wasted, featuring Lil Uzi Vert, debuted at Number 67 on the Billboard Hot 100.

In 2019, Higgins collaborated with artists like Travis Scott, and Ski Mask the Slump God. He performed the song Lucid Dreams on Jimmy Kimmel Live on August 8, 2018.

By the end of 2019, Higgins released singles like All Night, Hate Me, Run, Graduation, Bandit, and more. Bandit, featuring NBA YoungBoy was his last song.

On December 8, 2019, Juice collapsed and died from a drug-induced seizure at the Midway International Airport in Chicago.

Higgins’ first posthumous appearance increased his popularity even more. He appeared on Eminem’s 11th studio album on the track Godzilla. The song peaked at Number 3 on the Billboard Hot 100. On January 22, 2020, members of his family and his team posted an announcement on Instagram, thanking his fans.

On March 13, 2020, a remix of the single Suicidal from YNW Melly’s album featured vocals from Higgins. On April 17, 2020, the single No Me Ame, featuring Juice Wrld, Anuel AAA, and Rvssian got released.

His first posthumous single, Righteous, saw the light of the day on April 24, 2020. The song also got a music video with footage of Higgins.

When he was alive, Higgins said his music influence goes from rock to rap. He loved rappers like Travis Scott, Kanye West, but also British rock singer Billy Idol.

Critics classify his music as emo and rock leaning, but also genre-bending. His music focuses on every broken heart and every wounded feeling.

Lucid Dreams is the only track he actually wrote. He did the others impromptu. He crafted whole songs in a few minutes by off-the-cuff rhyming. His songwriting process involves freestyling lyrics.

Jarad Anthony Higgins had a history of drug abuse. This began at an early age. During his life, he spoke openly about his drug abuse experience. His mother said he also dealt with anxiety and depression.

Higgins lived in Los Angeles with his girlfriend Ally at the time of the death. They started their relationship in November 2018.

On December 8, 2019, he was aboard a private jet flying from Van Nuys Airport in Los Angeles to Midway International Airport in Chicago.

As the plane landed, Higgins began convulsing and seizing. Medical experts at the airport suspected opioid overdose. They gave him two doses of emergency medication Narcan. Higgins got transported to the nearby Advocate Christ Medical Center, where he died.

His funeral was at the Holy Temple Cathedral Church of God in Christ in Harvey, Illinois. In January, the medical examiner stated that the rapper died as a result of toxic levels of oxycodone and codeine.