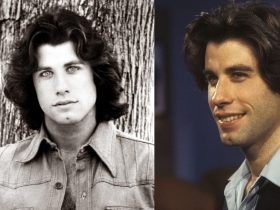 11 Rare Photos Of John Travolta When He Was Young

Born in July 1979, Lauren Brooke Baldwin is an American journalist and television host. For more than 12 years she hosted shows for CNN. Baldwin joined CNN in 2008 and announced her departure from the network in 2021. To this day, Brooke remains one of the most beautiful television hosts in America. Today, we want to take a look at some Brooke Baldwin sexy pictures.

She hosted the CNN Newsroom with Brooke Baldwin, airing from 3 pm to 4 pm ET on weekdays. Born in Atlanta, Georgia, Brooke attended The Westminster Schools. In 2001, she graduated with a BA in Spanish from the University of North Carolina at Chapel Hill. The same year, she got a BA in journalism from the university Hussman School of Journalism and Media.

During her undergraduate years, she studied abroad at the Universidad Iberoamericana in Mexico City. Baldwin started her career in 2001 at WVIR-TV in Charlottesville, Virginia. She quickly got promoted to morning anchor in the Huntington and Charleston area.

In 2008, Brooke joined CNN and worked in the Atlanta world headquarters until 2014. Since 2014, her CNN Newsroom with Brooke Baldwin operates in New York City.

Baldwin is an award-winning journalist. She won a Silver World Medal for Best Investigative Reporting at the New York Festivals International Television for her documentary To Catch a Serial Killer. She also got an Emmy nomination for her coverage of the New York City chokehold death protests in wake of Eric Garner’s death in 2014.

As one of the hottest television hosts, Brooke has a lot of steamy photos. Let’s take a look at some of the sexy pictures of Brooke Baldwin.

This is a photo of Brooke some five or six years ago in Rio. She posted it amid the Covid-19 pandemic to remind herself how much she misses the world. And as you can see, even in her early 40s, she hasn’t lost her adventurous spirit.

Brooke believes in strong is sexy. And in order to have good bikini photos of Brooke Baldwin, one must exercise. Here is a steamy photo of Brooke after finishing her workout routine.

Speaking of working out, Brooke often posts hot pictures of her in workout gear. She loves to start the week with a good and sweaty workout. Well, that is how she keeps her body in shape. And that is why we say she is among the hottest television personalities.

We spent most of the time during the Covid-19 pandemic in our homes. But that doesn’t mean you cannot dress better. With this Instagram post, Brooke wanted to remind people they can dress better for home. But she also said she might develop an allergy to heels.

Let’s move onto some pictures before the Covid-19 pandemic when people got dressed up for events. Baldwin has an elegant and sophisticated style. She doesn’t dress provocatively but still manages to look sexy. And it is not an easy job to do.

Here is another picture of Brooke and her impeccable style. Work, red carpet, at home, she always dresses perfectly. Definitely one of the more stylish women on television.

When you work in television, you have to have charisma. And a big smile. Without those two features, you cannot succeed. Brooke has them, and her smile can lift mountains. Here is a close-up photo showing her million-dollar smile.

When fashion brands put you on the women worth celebrating list, you know you have done something good. In 2016, she attended the Women of Worth celebration by L’Oreal Paris. And she definitely fits the criteria for that list.